Last Friday, while working from home, I received an unexpected phone call from my boyfriend:

Pack our camping gear! Tonight we are going to hunt aurora borealis! 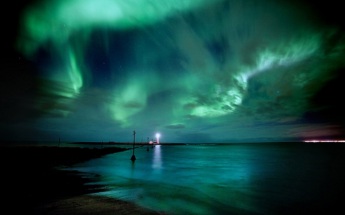 There are no words that could describe my excitement. To see aurora borealis (northern lights) was my dream since I was in kindergarten. The prediction was that thanks to a huge sun explosion aurora will be visible even in The Netherlands (much more South than Stockholm for those who are not familiar with European geography). I knew that no matter what we can’t miss this opportunity. My hopes were, however, not high. The moon was almost full and the sky was cloudy… Nevertheless, I packed anything that could help us survive camping in plus 4 degrees Celsius and waited patiently for our departure.

We left Stockholm after 8 pm and drove North for few hours. The clouds slowly drifted away towards South and soon we could see stars, the moon and forests. We reached a potential camping spot (in the neighbourhood of Färnebofjärden nationalpark) around 11 pm when it was completely dark. With a slight hope of seeing at least a glimpse of aurora I left the car in order to find a spot for our tent. I was taken aback as I saw aurora dancing above our heads. We did not have a camera (other than our phones) but it was as amazing as on any of the videos that you can find on the youtube. I must say, though, that human eye is less sensitive than a lens and “our” aurora was not as colorful as what one might expect.

We made a cosy camp at the shore of a lake. Aurora came and went during the night but we did not miss any of the occurrences thanks to other passionate aurora fans who created pages with surprisingly adequate aurora forecast. The fog and the moon made it finally impossible to see aurora at 2 am. It was a good excuse to go to sleep. The night was cold but the fresh air and the sound of waves put us to sleep.

We felt ultimately happy and spellbound by nature. There was no way that we could just go back to Stockholm the next day. Therefore, we decided to stay in the area for more nature adventures… To be continued…

3 thoughts on “The hunt for aurora borealis”